If you want to shoot something in your game, you need a prefab that represents every type of projectile. You may have regular bullets and laser shots. The two types should result in different effects when hitting various surfaces, e.g. bullets create debris, lasers make burn marks. EZ comes with a projectile component which implements the functionality to move an entity forwards each frame and check the world for collisions. When it collides with something, it will apply damage and a physical impulse. The projectile component does not, however, specify what kind of effect to play when it hits something. Instead, each type of projectile is given a string what type of interaction to do when it hits a surface. So our bullet projectile would use the BulletImpact interaction, and our laser projectile would use the LaserImpact interaction. Then when a projectile hits an object, it first looks up what type of surface it hit exactly. Then it queries that surface for an interaction entry with the desired name. If such an entry exists, it spawns the referenced prefab at the point of impact.

All surface interactions ultimately spawn prefabs. So if you want to have different footstep sounds when walking over stone, sand and mud, you need three prefabs, each playing a different sound. However, since they are prefabs, your creativity is not limited to playing a sound. Your "sand footstep effect" may contain spawning a small dust particle effect. And the "mud footstep effect" could additionally spawn a footprint decal.

Alignment: Defines how the spawned prefab instance will be rotated. The +X axis of the prefab is considered to be 'forwards'.

Note that depending on which system triggers the interaction, there may or may not be a 'direction' associated with it, so the 'Incoming' and 'Reflected' mode may be identical to the 'Normal' mode.

In the example image above you can see that the glass surface has a BaseSurface specified, which references Default.ezSurfaceAsset. What this means is that if some system (let's say the projectile component) looks up an interaction like BulletImpact on a surface and does not find it on the surface directly, it will then go to its BaseSurface and try to look up the interaction there. This can go through multiple steps until it either found the desired interaction, or it reached the last base surface and still found nothing.

For example the wood surface may set its OnCollideInteraction property to Bump_Wood. When you now have a wooden box and let that box fall onto a stone floor, the physics system will look up the OnCollideInteraction property from the dynamic object (the box) and use the string ("Bump_Wood") to trigger this interaction from the stone surface. If the stone surface defines such an interaction, the corresponding prefab will be spawned, otherwise nothing happens. 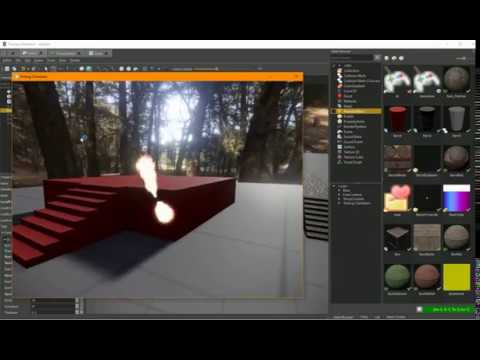